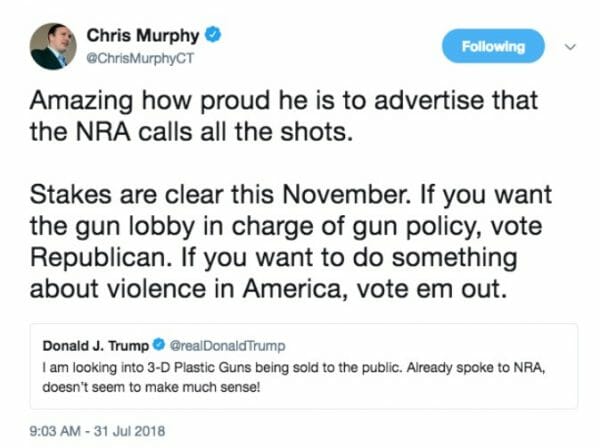 U.S.A. –(Ammoland.com)- “Republicans need to be scared of our movement,” Connecticut Democrat Sen. Chris Murphy declares. “If they don’t see us being coordinated and they don’t see us having the ability to mobilize voters and donors, they’re not going to be that scared.”

If they’re scared, Murphy surmises, if they see Democrats have turned citizen disarmament into a politically-winning issue, more of them will turn their backs on gun owners and start voting with the gun-grabbers. Based on what we’ve seen happen in Florida, he’s got a point. And in Vermont. And elsewhere.

It’s an observable truth that no Democrat can actually be “pro-gun,” but the Republican alternative is becoming increasingly problematic. All those grand promises that were made by “staunch defenders of the Second Amendment” in order to get elected have turned out to be empty words with so many. And as for advancing gun owner interests, anybody see any movement on national concealed carry reciprocity or on hearing protection?

Murphy and his fellow …Read the Rest