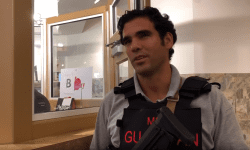 On the anniversary of the Parkland shooting, another Florida school is actively taking precautions against shooters by hiring armed guards to patrol its campus.

The Manatee School for the Arts, a charter school, will hire two combat veterans to protect the school and prevent any persons attempting to shoot up the school, according to HuffPost. The guards will each carry a handgun and military-style long gun, WWSB TV reported.

One guard with 15 years of infantry experience has patrolled the campus for a number of months, HuffPost reported. A second guard will patrol the campus starting at the end of February.

The hires coincide with the one year anniversary of the Marjory Stoneman Douglas High School massacre in Parkland, Florida. Former student Nikolas Cruz, 19, entered the high school on Feb. 14, 2018 and methodically walked through the school open firing on students in hallways and hiding in classrooms.

Cruz killed 17 people and wounded over a dozen others.

The Democratic National Committee (DNC) sent out a Thursday email that asked recipients to “stand with Democrats who will work to solve our nation’s gun violence epidemic” by providing their personal information. Upon provision of the information, however, email recipients were promptly redirected to a page asking for money “to stand up against the GOP and the gun lobby.”

The White House sent a Thursday tweet remembering the victims who lost their lives in the shooting and promising to make schools safer.

Today, @POTUS, @FLOTUS, and the entire country remember the 17 precious lives lost in Parkland, FL, one year ago. No parent or child should ever experience this kind of pain. School safety will always be a top priority for the Trump administration. https://t.co/01XxNmVF1I