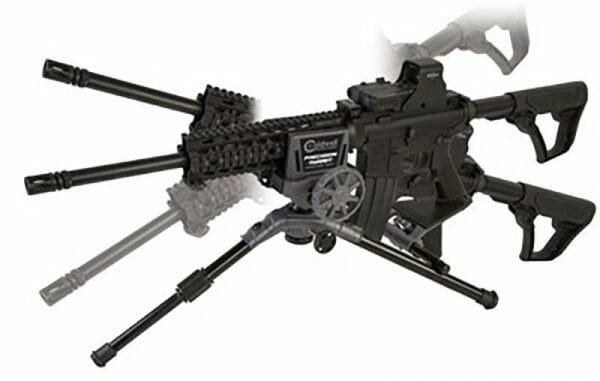 USA – -(AmmoLand.com)- The Turret was explicitly designed for AR-platform rifles. Conventional shooting rests do not take into account the extended magazines or the pistol grips on AR-rifles. As such, a lot of shooters opted for sandbags, instead of a front rest. They worked…. well, almost; because making precise elevation and windage was problematic.

Caldwell has always been at the forefront of engineering designs when it comes to shooting rests. Given their history, it was no surprise that their engineers would design a shooting rest for modern sporting rifles (MSR).

With the Caldwell Turret rest, a thirty-round magazine does not get in the way or impede your shooting. The adjustable foot between the rear legs provides a stable “platform” for the pistol grip. Once the rifle is “locked” into the forend clamp (which is well padded to prevent damage to your rifle), you can utilize the unique tilt and swivel of this rest… very much like what is found on the tripod of an LMG in the field. In short, with this rest, you have a full …Read the Rest