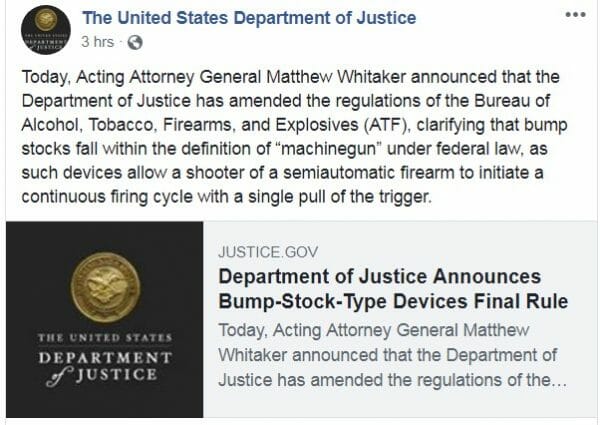 U.S.A. – -(Ammoland.com)- “Today, Acting Attorney General Matthew Whitaker announced that the Department of Justice has amended the regulations of the Bureau of Alcohol, Tobacco, Firearms, and Explosives (ATF), clarifying that bump stocks fall within the definition of ‘machinegun’ under federal law, as such devices allow a shooter of a semiautomatic firearm to initiate a continuous firing cycle with a single pull of the trigger,” the DOJ announced in a Tuesday press release.

“[T]he Department … made the decision to make clear that the term ‘machinegun’ as used in the National Firearms Act (NFA), as amended, and Gun Control Act (GCA), as amended, includes all bump-stock-type devices that harness recoil energy to facilitate the continuous operation of a semiautomatic firearm after a single pull of the trigger,” the announcement explained, belying prior precedent rules and testimony. “Because the final rule clarifies that bump-stock-type devices are machineguns, the devices fall within the purview of the NFA and are subject to the restrictions of 18 U.S.C. 922(o). As a result, persons in possession of bump-stock-type devices must divest themselves of the devices before the effective date of the final rule.”

This is the “surrender …Read the Rest