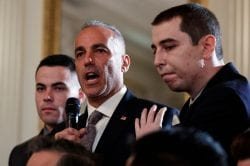 “I disapprove of the graphic nature of the video,” 19-year-old JT Lewis, who is running for Connecticut Senate in 2020, told the Daily Caller News Foundation. “Many studies have shown that glorifying shootings can lead to copycat shootings. (The media is the culprit here, and the SHP video will be all over the media today).”

Survive the school year with these must-have #BackToSchool essentials. https://t.co/9KgxAQ0KGz
This PSA contains graphic content related to school shootings & may be upsetting to some viewers. If you feel this subject matter may be difficult for you, you may choose not to watch. pic.twitter.com/5ijYMtXRTy

“Also, it should be made clear that the SHP is run by two victims’ parents,” Jesse Lewis’s sibling added. “Most of the victim’s families stay far away. They always neglect to mention that.”

Andrew Pollack, father of Parkland, Florida, victim Meadow Pollack and pro-Second Amendment activist, told the DCNF that the video is a “scare tactic, but that’s what parents need,” adding the video is all about awareness rather than guns.

“It’s disturbing. … Every parent thinks it’s not going to happen to their kid, but it can, and it does,” he said. “It’s an effective way to get this message across that when kids see something, they need to say something.”

“I understand the message these parents are trying to get across,” Pollack added.

JT Lewis also tweeted a response to the video Wednesday and SHP should avoid the use of graphic school shooting images “to get PR attention” because “that’s how the media creates copycat shooters.”

Sandy Hook Promise should NOT use graphic images of a school shooting to get PR attention. Remember, that’s how the media creates copycat shooters! @sandyhook

JT Lewis added the video “doesn’t speak” for him in a second Wednesday tweet:

Having lost a brother in the Sandy Hook shooting, I want it to be clear that the “Sandy Hook Promise” doesn’t speak for me!

The organization is run by 2 families of victims, but most of us stay far away. They don’t make that clear. We had to write a joint statement at one point

The advertisement released Tuesday is one of several public service announcements published as part of an SHP campaign called “Know the Signs” aimed at preventing school shootings.

The video announcement started with a student using new headphones to drown out the sound of screaming children while another ran from the shooter in new sneakers. A girl used a new sweatshirt to tie a door shut while calling the clothing “must have,” and another student used a new sock to tie a bloody wound.

The commercial ended with a student hiding in a dark bathroom while she sent a text message that said, “I love you mom,” on her new smartphone before a shooter entered.

“Each year, [SHP] produces creative and compelling public service announcements illustrating that gun violence is preventable when you ‘Know the Signs.’ In 2016, our ‘Evan’ PSA went viral with more than 1 billion views worldwide, effectively changing the conversation on gun violence prevention,” a SHP press release reads.

The commercial has caught the attention of many high-profile Twitter users, including 2020 Democratic presidential candidates.

JT Lewis has been an advocate of school safety since before announcing his campaign for Connecticut’s state Senate.

He described in a July video announcing his candidacy how he had spent the last year and a half “building a school safety movement on a national level,” which led to “the most comprehensive school safety report in history.” He said the government “used our input above all else” in the video, alongside a photo of himself and President Donald Trump in the Oval Office.