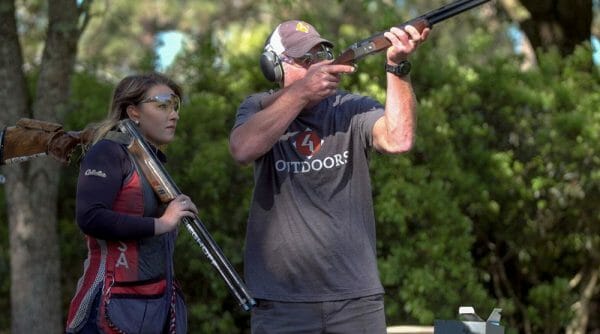 COLORADO SPRINGS, Colorado —-(Ammoland.com)- As a lifelong outdoorsman wishing to share his reverence of the outdoors, NFL Hall of Fame Quarterback Brett Favre, began an organization called 4Outdoors to provide meaningful experiences in the outdoors to people in need. Given his background and interest in the shooting sports, USA Shooting recently selected Favre as one of their honorary Team Captains. In a new, multi-part series airing on GetZone.com titled “USA Shooting Presented by 4Outdoors,” show host Favre talks with Olympic and Paralympic athletes about their struggles, victories, and the importance of raising awareness and funds for USA Shooting’s athletes.

In the premier episode of “USA Shooting Presented by 4Outdoors,” Favre shoots clays and talks with two-time Olympic bronze medalist Corey Cogdell-Unrein where he learns, “A lot of people don’t know shooting is one of the most expensive Olympic Sports. People think that we’re funded by the government…and that’s just not the case,” Cogdell says. “I’ve watched so many of my teammates struggle, and scratch, and fight to pay just their training expenses, and go in debt financially to pursue this sport. I’ve thought, how good could we be if we had the …Read the Rest