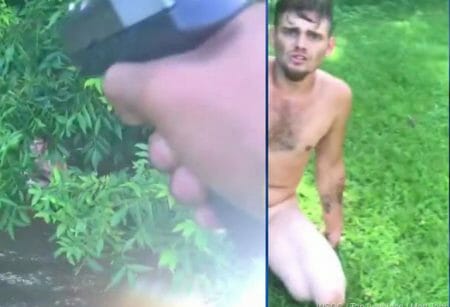 Arizona -(Ammoland.com)- In the afternoon of July 24-25, 2018, a naked white man was making a nuisance of himself at Trailblazer Park in Newton County, Georgia. A father with children at the park, on a church outing, used his legal firearm to detain the man for police.

A Covington, Ga., dad only wanted to take his family on a trip to feed the homeless. Instead, Tae Lovelace says they were harassed by a naked man and he was forced to pull out a handgun in defense.

“Had I not been licensed to carry at that moment who knows what this guy could have done to my family or any of the other families that were here,” Lovelace told WSB.

The police came and pointed their guns at the father, ordering him to put down his gun. The father did so, the naked man ran, but the police arrested him and took him into custody. From wsbtv.com:

That’s when he started recording with his phone for officers who arrived within minutes and ordered Lovelace to put down his gun.

“While the cop has his firearm toward me, the guy …Read the Rest