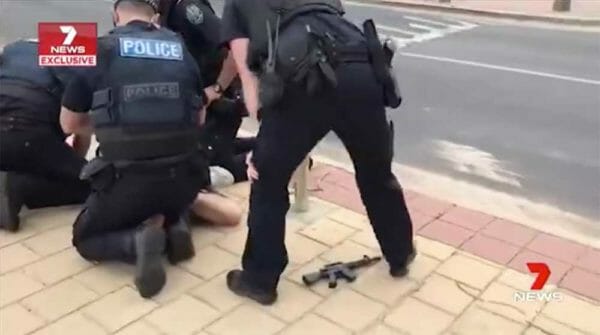 Australia -(Ammoland.com)- On February 9th, 2019, Australian police officers swarmed a man walking along a busy, coastal, pedestrian walkway in Brighton, Australia. Police took down the man because of reports that he was armed with a rifle.

In a video from 7 News Adelaide, you can see the toy gun next to a female officer’s boot. Use the tiles/bricks the officer is standing on for scale. Video link on facebook.com:

The toy appears to be about a foot long, less than one/third scale. No reasonable person could mistake it for an actual, functioning rifle.

Brighton is an upscale, urban, coastal suburb of Melbourne, Australia, in the state of Victoria.

It is illegal in Victoria to own a replica or imitation firearm without a firearms license.

The following information is from the Victorian police website. The last update is given as 18 May, 2018. From police.vic.gov.au:

Differentiating between an imitation firearm, replica firearms, and other firearm paraphernalia and toys:

There are a wide variety of firearm-themed items available on the market aimed at children or firearm enthusiasts. Depending on the overall appearance and function …Read the Rest