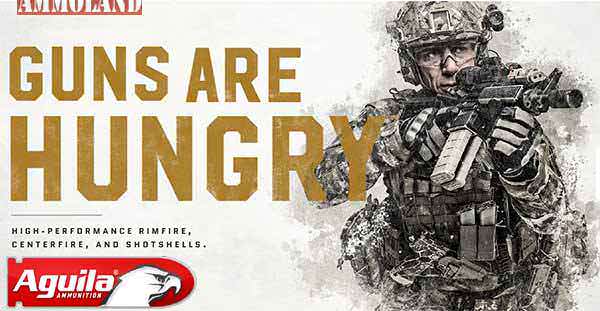 Aguila Ammunition and Texas Armament & Technology are pleased to announce they have been selected as a Bronze winner in the 38th Annual Telly Awards for their piece titled “Guns Are Hungry.”

The 30-second television spot focuses on what guns crave most – ammunition. It was produced in conjunction with Shine United LLC based in Madison, WI and Rockhouse Motion based in Geneseo, KS. The spot opens with stationary gun range targets and solitary ammunition. The voiceover is slow and deliberate. The pace begins to build with the loading of magazines and firearms.

The spot reaches a silent climax, the calm before the storm, and suddenly a symphony of gunfire erupts. Music, sound design, and quick cuts of firing and recoiling handguns, rifles and shotguns sells the concept of the need to feed your firearm with Aguila Ammunition.

The Telly Awards was founded in 1979 and is the premier award honoring outstanding local, regional, and cable TV commercials and programs, the finest video and film productions, and online commercials, video and films. Winners represent the …Read the Rest